The heavy traffic and bad roads of Lagos have been baffling online mapping tools with potential “life and death implications” for people trying to reach the city’s hospitals, research has found.

Researchers looked at cases of pregnant women trying to reach hospital in Nigeria’s most populous city, infamous for its roads, and found they faced a journey of up to four times longer than computers and satellites suggest, which mean the models for access to healthcare facilities are also out of kilter. 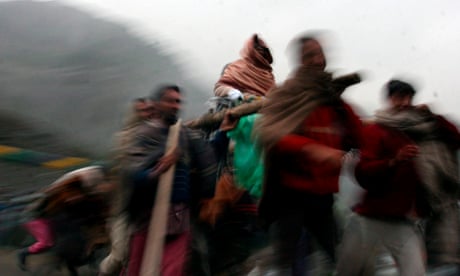 How does a pregnant woman get to hospital when there’s no road? By stretcher …
Read more

The study collected data from 738 pregnant women who arrived at four of Lagos’s largest public hospitals with life-threatening complications. Estimating their travel time using computer models and online maps, researchers sent out drivers to reconstruct their journeys and found that travel times were one and a half times longer than Google maps predicted, and four times longer than computer models.

“The World Health Organization recommends that women should be able to access health facilities within two hours,” he said, pointing out that online models all suggested they had, but that was not the case.

Worldwide 295,000 women die every year from complications of pregnancy and 99% of those deaths occur in low- and middle-income countries, with Nigeria accounting for 23%, according to Unicef. While this study focuses on Lagos, the authors suggest long travel times to hospital are “likely the case in other big African cities as well”.

• This article was amended on 2 February 2021 to remove an erroneous description of Lagos as Nigeria’s capital, which is Abuja.